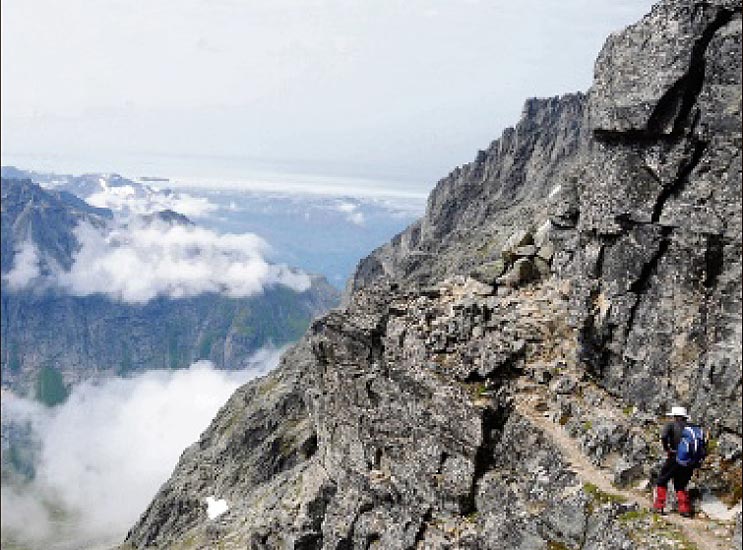 Gordon on ‘Heen’s Highway’ on the route to the summit of Store Trolltind. Photo: Iver Gjelstenli

THE BIG TROLL WAS ANGRY!

On Thursday July 11th 2013, 44 years and 4 days after their epic near-death experience on the Fiva Route on Store Trolltind in Romsdal in Norway (described in Gordon’s best-selling book ‘Fiva‘), Gordon and his twin brother John returned to the exit ‘hole’ at the top of the route with climber/reporter Iver Gjelstenli and guide Bjørn Bergsvik. (We had tried on our return to Romsdal in 2009, exactly 40 years after our Fiva epic, but had been thwarted by the weather. See photo gallery) 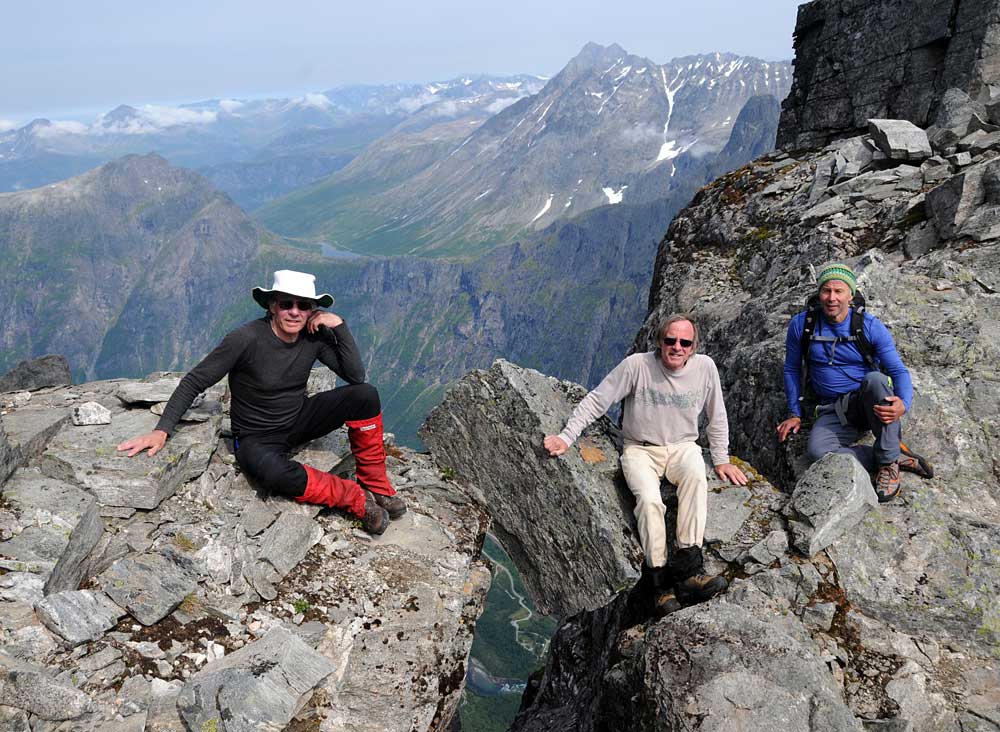 Gordon and John with Bjorn by the exit hole of the Fiva Route, 44 years and 4 days after their first epic arrival at this point in a badly injured state. Photo: Iver Gjelstenli

They then completed the climb to the summit of the mountain from the top of the Fiva Route (which, because of Gordon’s injury, they had not managed to do 44 years earlier). Although these final 500 feet were not technically difficult, it was steep and rather loose. The summit area is a surprisingly big triangular plateau on an incline so that the views are hidden until the very end … at the apex, which is quite stupendously exposed on the north and east sides. 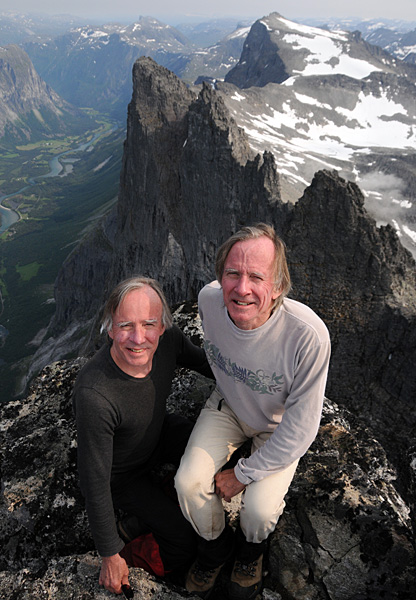 Gordon and John Stainforth on the summit of Store Trolltind on July 11, 2013, 44 years after making a very dangerous ascent of the mile-high Fiva Route, which is almost vertically below their backs in this picure. Photo: Iver Gjelstenli

After we’d had a bite to eat, and visited Arne Randers Heen’s legendary minute summit ‘cabin’ (just room for one person to sleep, lying horizontal) John took some amazing movie footage with his GoPro helmet camera. (These may take a while to load because they’re massive files): 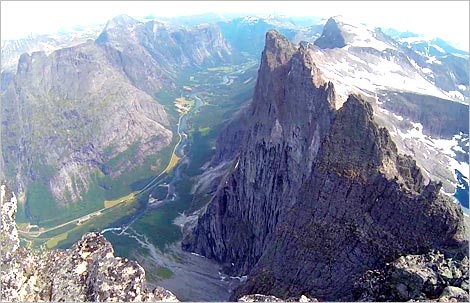 Movie footage of the downward view from the summit of Store Trolltind, 11 July 2013. GoPro by John Stainforth 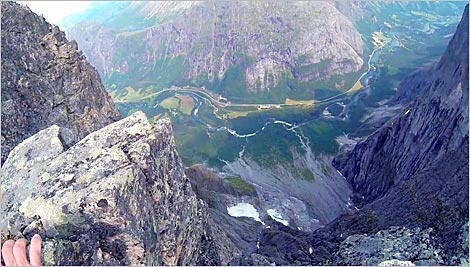 Movie footage looking straight down the Fiva Route from a shoulder c. 50 metres below the summit of Store Trolltind. GoPro by John Stainforth 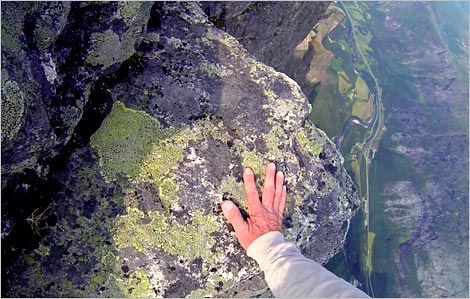 Looking down the Fiva Route from an overhanging prow about 70 m below the summit of Store Trolltind. GoPro by john Stainforth 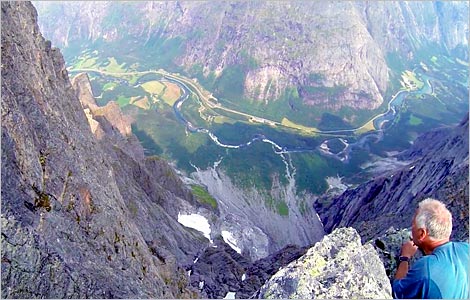 Movie footage of Iver Gjenstenli, our guide, looking down the vertical mile of the Fiva Route from near the summit of Store Trolltind,11 July 2013. GoPro by John Stainforth

But perhaps the Trolls were angry, because it came at a price! As a direct result of his poor eyesight, Gordon was badly affected by vertigo near the summit, something that had never happened before in 47 years of climbing.

On the most dangerous part of the descent, Gordon had to make two abseils and on each nearly passed out. During the remaining four hours of the descent he was having frequent dizzy spells with vomiting. 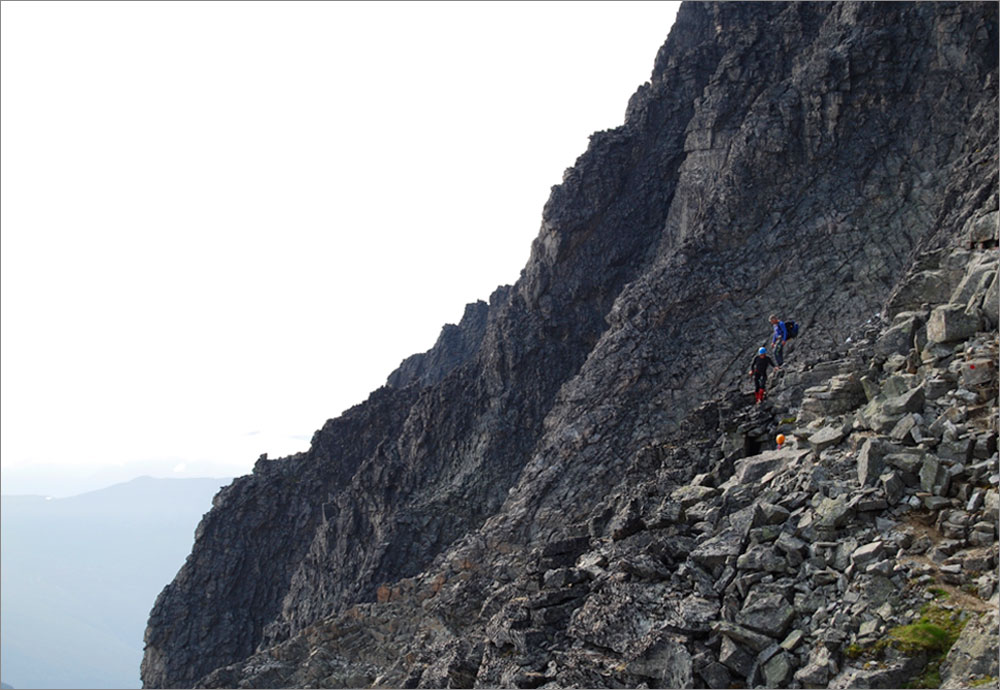 Reaching easy ground on the descent of Store Trolltind. Gordon suffering from vertigo being shepherded back to safety by Bjorn. Photo: John Stainforth

On the descent I decided (because of my eyesight problem, a macular pucker which gives me double vision and can cause vertigo on steep and difficult ground) that this would be my last serious mountain. A fitting conclusion to 47 years mountaineering. 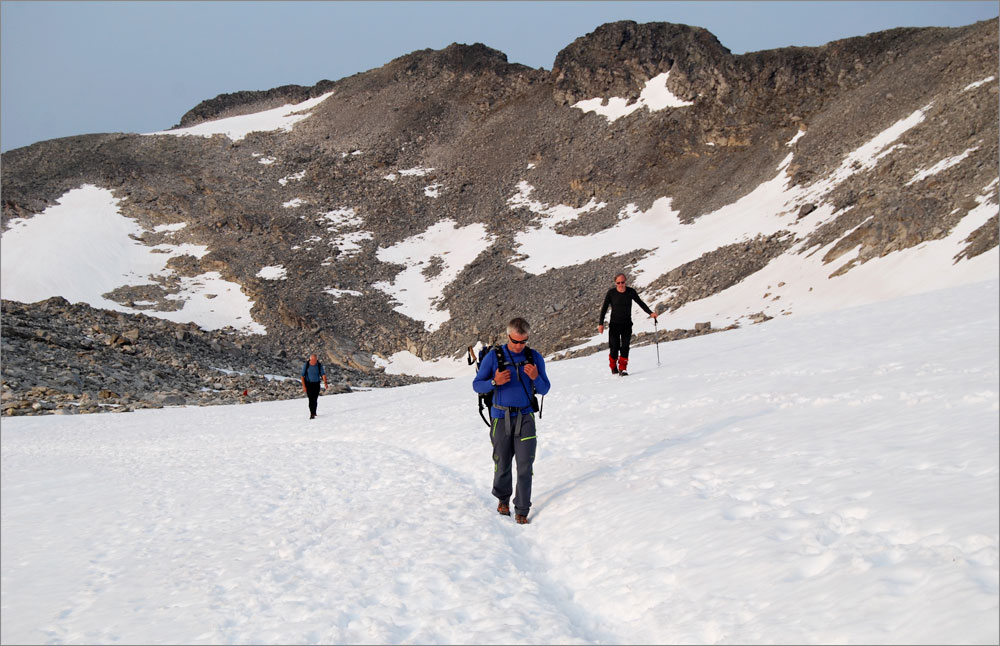 Bjorn in the front, with Iver and Gordon behind … Gordon’s farewell to Store Trolltind (and to serious mountaineering). Photo: John Stainforth

Iver and Bjorn were absolutely superb throughout, and got us safely back to the road after a 13-hour round trip.

See also our collective photo galleries of the ascent …

… and the article Iver Gjelstenli wrote about it in the Romsdals Budstikke, 13 July 2013: ‘Back at Ugla Skar 44 years later’: 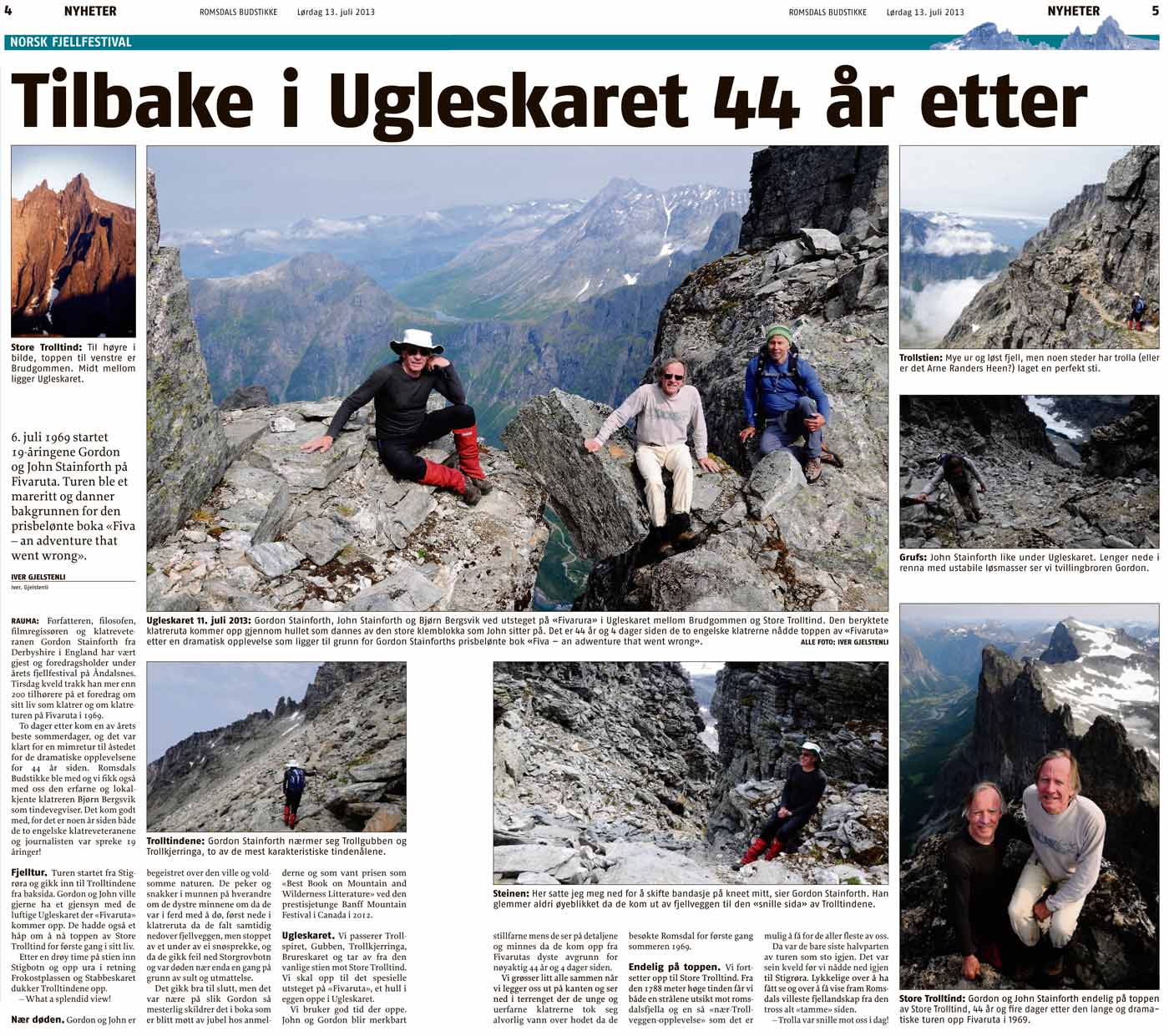 Article Iver Gjelstenli wrote about our climb in the local Romsdal newpaper. Click to enlarge