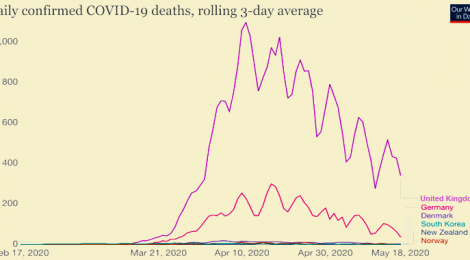 The latest graph, showing the number of deaths relating to coronavirus in different countries in Europe, depicts in an even more chilling way the level of Johnson’s much trumpeted ‘world beating’ ‘achievement’, the ‘success’ that he’s apparently so proud of.

As @EnglishmanAdam puts it, ‘Johnson telling Starmer to be more positive is like running over your neighbour’s dog and then telling them to look on the bright side.’

The hyperbolic self-gratulatory language these ‘macho’ extreme right-wing nutters use is extraordinary. Liam Fox says, in a blackly laughable way, ‘the UK is not worst in the world, we’re only 4th worst. Give us some credit’. And the ever-vainglorious Trump said on May 20 that he views the 1.5 million confirmed coronavirus cases and 92,000 deaths in America – the most of any country in the world – as a ‘badge of honour because we have more testing than anybody else.’

Another favourite line of Johnson and Hancock is that they are being ‘led by the science’. But this is simply not true. See this article showing how the government ignored the advice of scientists in mid-March. Sir David King, a former chief scientific advisor was particularly scathing.

In Britain it appears that the manslaughter may have been deliberate, as a result of Cummings’ and Johnson’s ‘herd instinct’ strategy, that was so flatly rejected by Jacinda Ardern, PM of New Zealand.

It’s also worth listening to her whole speech of March 20. The contrast of her intelligent, focussed approach with Johnson’s incompetent shambles is totally shocking.

There is also no doubt that his extraordinary procrastination has cost thousands of lives (and later I shall discuss the question of Johnson’s possible legal liability, not to mention the whole question of civil lawsuits which will no doubt run into thousands.). I do not have any figures for the UK, but researchers doing disease modelling in America have shown that if the U.S. had begun enacting social distancing just a week earlier in March, about 36,000 lives could have been saved. (New York Times, May 20, 2020.)

Rather than write my own detailed blog about the UK government’s disastrous mishandling of the Covid-19 pandemic, I can achieve the same end much more effectively by simply letting the experts speak. On May 15th, the following damning article appeared in the British Medical Journal. Many will have seen it already, but here it is again for those who haven’t. Essential reading, from those who know what they’re talking about:

Too little, too late, too flawed

In the space of just a few months we have in effect suffered an unprecedented triple whammy.

First, the calamity of the electorate (probably because of the woeful inadequacies of the Opposition at the time) voting for Boris Johnson as our hugely egotistical and dysfunctional ‘Prime Minister’.

Second, the Coronavirus crisis developing in February, which, compounded with the first, resulted in extraordinary government inaction, with much macho nonsense from Johnson, bragging about shaking hands with coronavirus victims and ‘taking it on the chin’.

In early May, this chilling summary of his shocking, inexplicable tardiness, began doing the rounds on Facebook (unfortunately I do not know who first compiled it). Everyone should read this list of irrefutable facts:

Truth hurts, but those who supported Boris and continue to do so are eventually going to have to do that most difficult of human things, swallow their pride and admit they were wrong. Very wrong.

The third whammy is that – scarcely believably – the British Government are still determined to compound the Covid catastrophe with a no-deal Brexit at all costs.

It nearly makes one believe in astrology: that there must have been some uniquely unpropitious alignment of stars towards the end of last year.…

This final whammy, Brexit, beggars belief in the present context. But that will have to be the subject of a future blog.

Finally we have to consider the extent of Johnson’s personal culpability.

A brief perusal of the internet suggests that he may have committed at least three serious crimes (though, as I say at the end, these arguments are unfortunately extremely unlikely to succeed):

1. Misconduct in a public office. A common law offence with no limit to its penalty (so ‘penalties up to life imprisonment are available’). A detailed article may be found here.

2. Gross negligence manslaughter. A common law offence, the elements of which were recently (March 14, 2019) summarised by the President of the Queen’s Bench Division [1] as being:

‘the breach of an existing duty of care which it is reasonably foreseeable gives rise to a serious and obvious risk of death and does, in fact, cause death in circumstances where, having regard to the risk of death, the conduct of the defendant was so bad in all the circumstances as to amount to a criminal act or omission.’ [2]

Examples of gross negligence manslaughter include:

Parents or carers who fail to protect the victim from danger

Employers who ignore the safety of their employees

Restaurant owners failing to take steps to inform customers of foods they serve that may contain eight of the most common type of food allergies.

A railway crossing gatekeeper omitting to do his job at the crucial time. [3]

An anaesthetist failing to notice his patient’s lack of oxygen. [5]

‘Though vague, gross negligence manslaughter may still be compatible with the principles of legality that underlie a void for vagueness doctrine, namely fair notice and restraint of arbitrary power.’

See this interesting article (more accessible for the layman) discussing the whole question in detail.

There was also a useful thread on Twitter in mid-April.

Unfortunately, as a recent article in the online legal magazine LittleLaw has suggested, all this may be both naive and unrealistic, for two reasons: one, ‘it’s unprecedented’, and two, there is such a thing as ‘the doctrine of sovereign immunity’. To which the frustrated layman might well retort: ‘Since when was the Prime Minister “sovereign”?’ The PM is not the Head of State. Nevertheless, the learned lawyers sound rather certain that Johnson is, quite literally, above the law.

I find all this very depressing, and yet it seems certain that there will be a very serious public enquiry. That it will all come out in the wash, one day. Even if it takes years and decades (like the Hillsborough inquiry). And those responsible will be brought to justice – a grim business, like a latter-day Nuremburg, perhaps – and that Johnson might even then be found culpable.

Finally, on a lighter note, here is a pitifully cheerful Tweet from Matt Hancock on April 19th, two months after the crisis had begun:

Having led the delivery of the London Olympics, Lord Deighton’s appointment to drive PPE manufacturing with a singular focus is a brilliant step forward.