Failure to see the full picture

Surely the underlying problem with some (many? most?) politicians, like some (many? most?) notorious TV car programme presenters, is akin to tone deafness or colour blindness? Which is another way of saying they have an inability to see ‘the full picture’.

As someone who attempts to see the world with the eye of an artist or philosopher, I am not saying that I have managed to achieve this myself, because it’s surely a nearly impossible ideal (rather like that set up on a pedestal in Beethoven’s ‘Ode to Joy’). But it is an ideal nonetheless.

It seems to me that this is what the critics of Jeremy Corbyn have lost sight of. All those Tories who gleefully sneer at the strength of his following – because they believe that no one can nowadays still be old-fashioned enough to cling to ideas such as caring for the whole of society – fail to realise that a sizeable swathe of the electorate do not in fact hold their selfish and greedy ideals. They cannot see the broader picture, or anything other than their own myopic view.

I see that the technical term for the most common form of colour blindness is deuteranopia, derived from the Greek for ‘secondary’ (deuter-) + ‘blindness’ (anopia), because the retina fails to respond to the colour green, which is regarded as the second primary colour.

That set me thinking about the possible derivation of that appallingly cruel, bigoted and chauvinistic Old Testament book, Deuteronomy.  I discovered that it in fact means ‘second law’, I think because it adds to laws put forward in Exodus (I would have to do further research on this.) Then I discovered that, interestingly, deuter, ‘secondary’, is itself derived from the word for ‘lack’, so that it means secondary in that sense too.

Having had this train of thought, I then happened to look at the BBC News website and found myself confronted by an image of the bigoted and parochial Mr. George Osborne in Helsinki to ‘renegotiate our relationship with the EU’ with some of the other European economic ministers. The picture was of Osborne coming down a grand staircase with the French minister Emmanuel Macron … 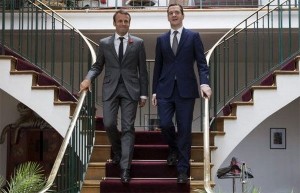 … and I was immediately reminded of a picture I commissioned last year for a yet-to-be-published science-fiction novel of mine (for various reasons I have put it on hold for the time being) in which two of the main protagonists are coming down a stairway to take part in a notorious annual ‘contest’. The book is an extreme dystopian satire and this ‘contest’ – sorry, I won’t tell you what it’s about (a bit of a tease I know) – represents the height of parochial yet chauvinistic human hubris. 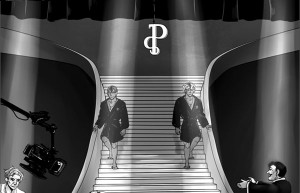 … That is just the top half of the picture. I won’t tell you what’s at the bottom. I’ll enforce a bit of ‘anopia’ on you, and leave it to your imagination.

← Beethoven’s double resurrected from the dead
71st anniversary of the Battle of Arnhem, 2015 →