Browse: Home   /   Memories that will Kinder linger for ever … 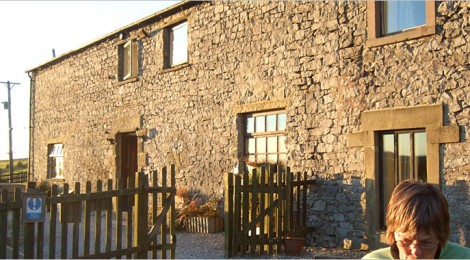 Memories that will Kinder linger for ever …

[with apologies for the appalling title pun … :)]

Last week, from 28 Sept – 1 Oct, I had an unusually rich four days in the hills with a reunion of Freda’s old University of East Anglia Mountaineering Club friends in an excellent double cottage at Hulmes Vale Farm on Tideswell Moor in the High Peak. They were as harmonious and sociable a bunch of climbing and walking folks as I’ve ever had the privilege of spending my time with, and the few ‘outsiders’ – spouses and friends like myself – were made to feel completely ‘at home’ and part of the group.

Everything went superlatively well, as if the whole trip had been blessed. The organisation, thanks mostly to Emlyn Jones and ably backed up by Mike Ritson, etc., was superb (though it’s really quite wrong to single people out, because so much teamwork was obviously involved), and the catering was truly spectacular. We were also blessed, in complete contrast to the first three days of this week, with perfect ‘Indian Summer’ weather. Really, the trip could not have been more successful.

I was very keen to reacquaint myself with Kinder Scout (last visited six years ago), so I managed to persuade the walking team (of ten) to do one of my favourite, and quite adventurous, ‘circuits’ of Kinder on the Tuesday.

The next day we had a complete contrast in the nearby White Peak, making an interesting ramble around the Monsal Dale/Cressbrook Dale area.

On Thursday, we visited dear old Windgather, one of the most delightful, unspoilt ‘beginners’ gritstone crags in the whole world 🙂 I don’t think I’d been there for about two decades. Although I haven’t climbed for 8 years (eyesight problem) I tied on the rope and seconded some old easy classic with a name like ‘High Buttress Arete’ – thanks to Keith Ratcliffe. 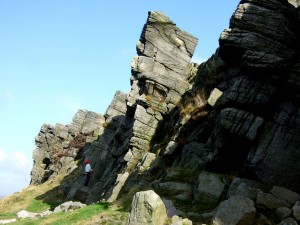 But in this blog I really want to talk about Kinder Scout.

The magic of Kinder

This moorland plateau, less than eight miles from the huge conurbations of Manchester and Sheffield on either side, has a uniquely wild charm. Like a natural flat-topped citadel with gritstone battlements all around its rim, its peat-covered top (2000 feet asl) is so wild that even sheep cannot safely graze there.

I first visited it in about 1990 when working on my first book, Eyes to the Hills, with a very amusing chap called Dave Grainger. We hadn’t done nearly enough planning or studying of the map and very soon became hopelessly lost among a maze of deep V-shaped ravines (‘groughs’) in the black peat. It really was like a maze, because each grough was at least ten feet deep so that we couldn’t see out. Furthermore, it was in diabolically boggy condition after recent rain, each grough containing a small stream. We floundered about for hours in the bog, getting completely covered in black mud. For some mysterious reason, I was in high spirits and found it all very amusing. Very early in the proceedings I suddenly had the crazy idea of playing a game which I’ve never played before or since in which both of us had to talk nothing but complete bollocks. Sensible comments were not allowed. We managed to keep this up for about 4 hours until we finally reached safety, and I don’t think I’ve ever laughed so much in the hills.

But of course, it’s quite a serious place, and really should be left alone in bad weather or cloud. Since that first occasion I have ventured onto it on dozens of occasions, exploring it from all sides, but I don’t think I’ve ever been up there in such good, dry conditions as we had last week.

We started up Golden Clough from Edale on the southern side. Being almost a scramble, this has the merit of getting one to the top very rapidly. I was first introduced to this route in 1997 by the great pioneer rock climber Arthur Birtwistle (then nearly 80 years old) while doing the photography for my book The Peak: Past and Present. He told me that this is the fastest way to reach the rim. 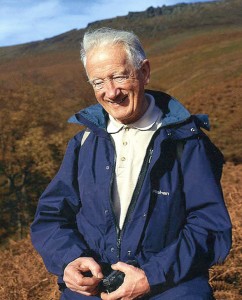 Birtwistle was almost certainly the most technically accomplished rock climber in Britain in the late 1930s, making such futuristic ascents as Diagonal HVS on Dinas Mot and the first pitch of Vember (the Drainpipe Crack) E1 on Clogwyn d’ur Arddu in 1938. He also developed many gritstone climbs in the Peak, primarily on Laddow (e.g Priscilla Ridge HVS) and the Kinder Edges, including Upper Tor, seen above his head in the picture on the right. 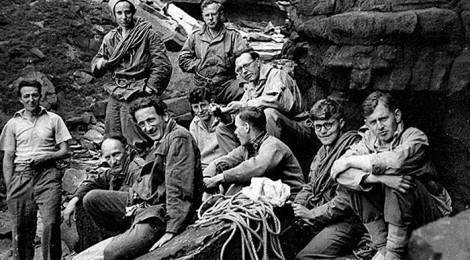 Last Tuesday we first followed the southern rim before heading diagonally across the centre towards Kinder Downfall on the western side. We were struck by the enormous amount of grass that has been planted in recent years. While this has stabilised the peat, it has not made the route finding any easier, as there are virtually no paths.

The waterfall of Kinder Downfall, which in bad weather and a strong wind can be blown vertically into the air in a waterspout, was almost completely dry.

After a short stop here we crossed to the north rim. This is potentially more tricky than the first crossing (and Mike insisted on not following my recommended route, which I have done several times in the past …!) – but the conditions were so dry that it was unusually straightforward, though on several of the tricky stream crossings man-made dykes proved very helpful.

The northern rim of Kinder at this point is one of my favourite spots in the Peak District, with a very wild outlook, so different from the pastoral Edale side. Here we stopped for yet another (!) lunch break at the superb pristine gritstone slabs above the Chinese Wall on the far side of Fairbrook Clough. That wonderful wavy edge where Emlyn is standing has probably looked exactly the same for thousands of years. 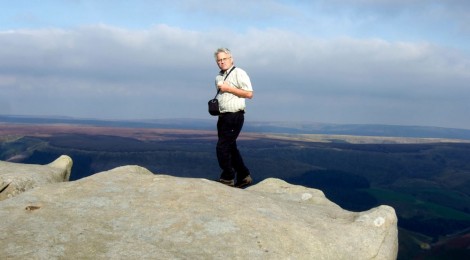 I was last at this very spot six years ago with Freda: 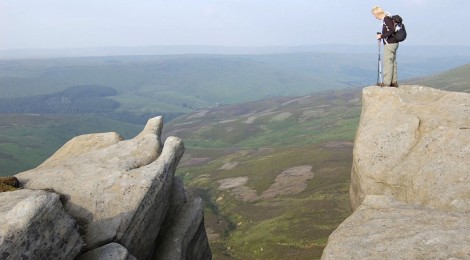 Freda above Fairbrook, Kinder Scout, 2009 (above and below) 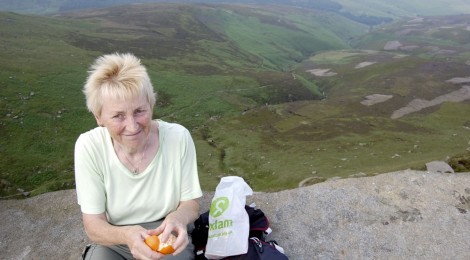 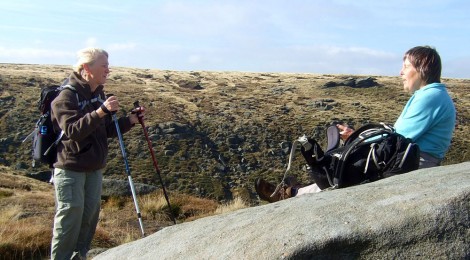 Freda & Clare having a natter above Fairbrook on Tuesday 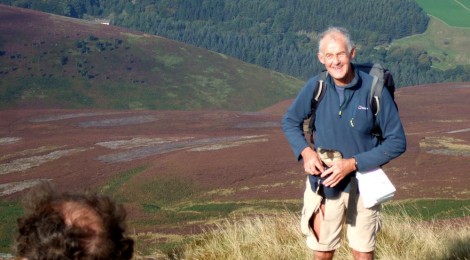 Mike Ritson above Fairbrook. The Snake Inn can just be seen, top left, on Snake Pass.

While we were having lunch here on Tuesday six years later, and Freda was discussing the meaning of life with Clare, I was able to reflect on some of the many memorable days I’ve had on Kinder in the past, in all weathers, in summer and winter. (Winter is particularly recommended on a fine day when it’s turned into an arctic wilderness and everything is frozen solid.) 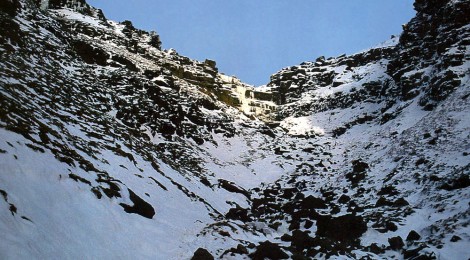 Then there were all the days of rock climbing and large-format still photography for my book The Peak: Past and Present, mostly in the late 1990s. Kinder’s rock climbs are superlative on hot midsummer days, far from the madding crowd. Such routes as Twisted Smile (HVS), Legacy (HVS) and Intestate (E1) on the northern edges are as good as any gritstone routes anywhere. Also very good are Upper Tor Wall (HS), first climbed by Birtwistle, Ivory Tower (HVS) and Flash Wall (HVS) on the southern edges. The contribution of Siegfried Herford (arguably the ablest climber in the UK before he was killed in the Great War) was outstanding. Notable are his routes on Mermaid Buttress near Kinder Downfall, dating from 1912, including the badly protected and perhaps undergraded Mermaid Ridge (HS), and the even worse-protected Herford’s Route (HVS) on the Pagoda (which is really no easier than Birtwistle’s Diagonal Route in Snowdonia, mentioned above.)

After this wonderful second lunch break, we continued along the north rim, eastwards … well, some of us did. About 2/3 of us (who had never been on Kinder before, and seemed to think they knew better) elected to take a modern path that’s set well back from the edge and certainly wasn’t there a decade ago. I obstinately stuck to the old-fashioned way along the rim, accompanied by Mike and Lizzie, because this really is one of the great classic paths in the Peak District. 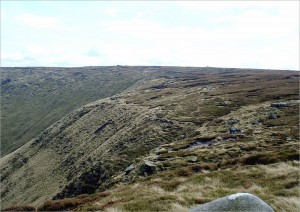 It’s still astonishingly small, not much wider than a sheep-track, perhaps thanks to that new, higher path. At the best point, rounding a small outcrop with an astonishingly spectacular drop on the left, I turned to Lizzie and said, ‘Just look at that view!’ – and she said, ‘I’m not looking!’ probably because she’s a bit afraid of heights. 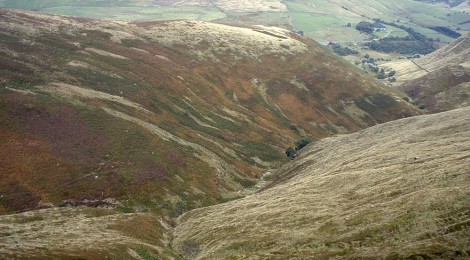 I was aiming, then, for the classic ‘seven-minute crossing’ back to the south rim, which I have done many times before. For at least twenty minutes before we reached the correct point to turn right at the narrowest part of the plateau above Blackden Brook, I was being urged to head off into the centre … but I stuck to my guns … and all was well: we arrived in exactly seven minutes at the top of Nether Tor on the southern rim. I have always found this seven-minute crossing extremely satisfying: I love the way one arrives sooner than expected at the rim, because of an optical illusion with the rocks of Ringing Roger still quite a long way off to the left, and the slope of the ground.

There then simply remained a traverse out to the finely positioned spur beyond Ringing Roger and the big zig-zag descent of The Nab. I had favoured this route because of my memories of descending the spur in the evening sun in the past, and on Tuesday evening it lived up to all expectations, with that other Eden, the demi-paradise of Edale below, bathed in golden sunlight. 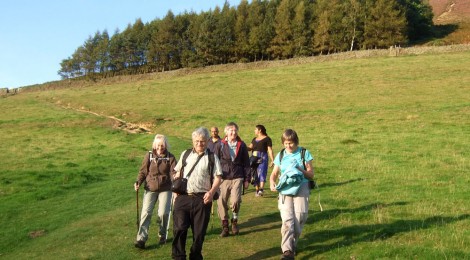 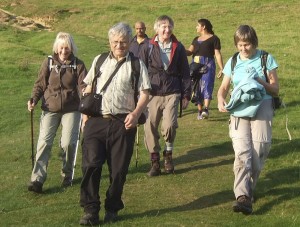 ← 71st anniversary of the Battle of Arnhem, 2015
Strange mistakes in European history and geography 1/4: The map of Europe →