Browse: Home   /   The Private Life of a Reclusive Genius 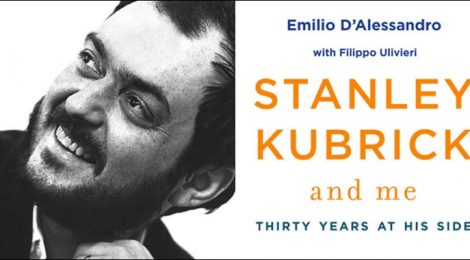 The Private Life of a Reclusive Genius

gstain / December 28, 2016 / Comments Off on The Private Life of a Reclusive Genius / Arts

One of the Christmas presents I received this year was Stanley Kubrick and Me by Emilio D’Alessandro (Arcade Publishing, 2016). I’ve been wanting to read this for some time, and I found it at least as interesting as I expected. Emilio was Kubrick’s long-standing loyal driver and general factotum for over twenty years, and he knew him in his home context as well as anyone outside his immediate family. His book therefore has a very intimate and unusual perspective. Emilio is a very nice man, with a heart of gold, who wears his heart on his sleeve (and I was absolutely delighted to meet him again last year at The Shining 35th Anniversary reunion at Elstree).

But the book is also about Emilio’s unusual relationship with Stanley (as we who worked for him always called him) that – it’s scarcely exaggerating to say – was almost like a platonic love affair. And this is where I feel a slight unease about it, which I can’t quite put my finger on. As with all ‘lovers’ there’s an element of Emilio in which he is claiming Stanley ‘for his own’, and like all lovers he’s inclined to say too much. There are times, I feel, when Emilio quite definitely crosses a line when it comes to some of the more personal aspects of Stanley’s life. I won’t say what these are, because then I would be committing the very transgression I am criticising.

The point is that Stanley was an intensely private, even shy, man who hated any publicity of himself rather than his work; and I find it very hard to believe that he would actually have approved of this glaring spotlight on his home life. I can almost hear him saying, ‘Oh, no, Emilio, you can’t do that – you must never do that.’

I am at the moment in the throes of writing a biography of my great uncle, a famous world-speed-record-breaking pilot, who was a very dark, psychologically-unhinged character, and I am acutely aware that in some respects I am prying intrusively into some matters that should perhaps remain private. Yet, on the other hand, there is the old problem of truth: there is no point in writing a book that will be of interest to the general public if it does not capture the essential truths of the subject as honestly as possible. It’s a very tricky balance – revealing just as much as is necessary to give a complete, balanced, true overall account.

There is no doubt that Emilio’s book on Kubrick is performing a great service to film history, and that movie buffs will be grateful in future years for this new perspective (a bit like reading some of the contributions in the classic ‘Beethoven: Impressions By His Contemporaries.’) Yet the problem I have with it is that it is manifestly not a complete picture. Emilio unashamedly confesses that he has little interest in the cinema, and shows little interest in Stanley’s films themselves (It was many years before he got round to seeing even some of them in a cinema). So, in that respect, Emilio remains something of an outsider to the larger picture, which for me, gives parts of the book the characteristic more of gossip than of valuable insight. An eccentric recluse observed behaviourally from the outside, with never any attempt to enter inner world of the creative artist. It tends to emphasise simply the eccentricity of Kubrick’s life style rather than his extremely unusual approach to the whole craft of film-making.

So I am left with a peculiar feeling. On the one hand there is the everyday Stanley I remember well, but on the other, there is the other, more historically important creative Stanley that I got to know – at least to some extent – that is here entirely missing.

One of the problems with working for Stanley was that, in becoming part of his team you almost had to become a kind of modern-day ‘disciple’. We used to joke that when you worked for him you literally had to ‘take up your bed and walk’ and that the only way you could ever get home was if there was a family wedding, birth or funeral. You spent many days away, and your personal life had to be abandoned completely for weeks on end. (On The Shining there were two spells when I was away from home for over 50 days on the trot.) But, if like me, you were a fanatically keen film maker, you didn’t mind this a bit, in fact you were thrilled to have the privilege of working for such a great man.

Another problem was that, perhaps unfortunately, Stanley ran his home life a bit like producing a movie: he had a hands-on, perfectionist approach to absolutely everything. The snag was that while he was a total expert on all matters relating to film, he manifestly was not when it came to running a home.

When my work on The Shining, and then on his daughter Vivian’s documentary Making the Shining, came to an end, Stanley begged me to stay with him, with the promise of being his editor on his next movie. I’m afraid it didn’t take me at all long to decide not to do this, because I knew that it would probably be about five years before Stanley’s next film would go into production, and meanwhile I would end up as a general technical assistant-cum-dogsbody. Although I had worked for quite a few years in television, The Shining was my first big movie, I still had a lot to learn, and I was only interested in working on movies. So I said, ‘No, Stanley, I have to get out there, and work in the cutting rooms’. I think though, he respected me for that, indeed what he said to me was extremely complimentary (I shall tell that tale one day). And also – let me just say vaguely – he wanted me back ‘on later films’ but unfortunately this was not possible. That story I may tell too. But probably not; because when I eventually come to write an account of working for him I shall concentrate very much on the adventure of making a great film, and on the way Stanley worked creatively. Only touching on his personal life just so much as is strictly necessary to that story.

I think what I have written above is perhaps a bit more critical than I initially intended, for as someone else has said, overall the book is ‘delightful’. I added a further note about it on a Facebook page (Stanley Kubrick Appreciation Society) that I’ll repeat here:

“.. the book showed mostly the domestic side of Stanley rather to the exclusion of Stanley-at-work. So that it both is and is not the Stanley I remember. I don’t think his full personality can be ‘pinned down’ at all easily. What was most striking about him to me was how he seemed like several completely distinct personalities. In a social situation he typically became almost unrecognisable – rather quiet, retiring, and ‘sweet’, but when we went back to the cutting room it was like the flicking of a switch: he reverted to his very serious, concentrated film-making self. Even socially, he didn’t actually ‘chat’ very much at all. It was mostly witty quips. At the meal table he was often talking about world affairs: I remember him being fascinated by the whole story of President Carter bungling the rescue of hostages in Iran, for example. Of course, any book is bound to mention his eccentricities, because they’re amusing and entertaining, but I remember that a lot of the time he just was not eccentric at all. Mostly very focused and clear thinking.”

Tags: Emillio D'Alessandro, Stanley Kubrick and Me, The Shining
← The Proms embrace the brotherhood of man, 2016
Happy New Year, Citizens of Nowhere →