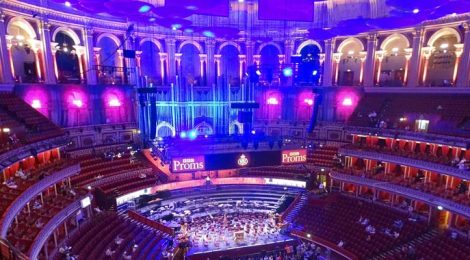 The Proms embrace the brotherhood of man, 2016

Oh dear. The Telegraph, which this year has regressed from being a respectable broadsheet to a blatant Brexit propaganda rag, has got it wrong again. In its objection to Remainers waving the EU flag this evening at the Last Night of the Proms, it shows that it completely misunderstands both the international spirit of the Proms and the true meaning of patriotism. It talks of an anti-Brexit group’s plans to ‘hijack’ the event by selling flags that have the EU symbol on one side and the Union flag on the other. One of the Remainers involved said: ‘That should get all but the staunchest of Brexiteers onside.’

Was that good enough for The Telegraph? No. It says that ‘MPs have called for the BBC to intervene immediately, to prevent the night being “hijacked by an attempted rejection of the will of the British people”.’

The ‘MPs’ it refers to turns out to be none other than that not-so-well-known music lover and cultural standard-bearer Bill Cash, the Eurosceptic MP for Stone. ‘The climax of the last night,’ he said, ‘is the singing of Rule Britannia – which is the great hymn to Britain and certainly not to the European Union.’

First, many may find his expression ‘rejection of the will of the British people’ rather over-simplistic since the 52-48% vote was certainly not overwhelming and has proved to be horribly divisive. Indeed, in London (and this will probably be more clearly representative of most Promenaders tonight), the vote was roughly 3:2 in favour of Remain (59.9% to 40.1%).

Here is a true breakdown of the ‘will of the British people’ by region: 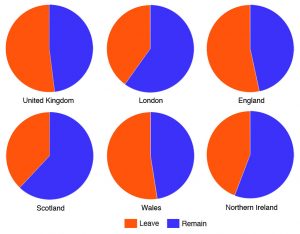 The EU referendum. How the UK voted by regions.

Now we hear that a pro-Brexit campaigner, the millionaire businessman Arron Banks (who led the Leave EU campaign), is planning tonight to hand out 10,000 Union Flags in response to the Remainers double-sided flags.

Sir Nicholas Kenyon, a former controller of Proms, is worried. “There may be a sense of foreboding that this most British of occasions might be hijacked to celebrate the triumph of Little England, to reinforce the message of a land of hope and glory in which Britons never shall be slaves – to the EU or anyone else…. As we redefine our cultural identity in the wake of the Brexit vote, it’s vital that it shows us, like the rest of the Proms, as open, welcoming and innovative – and, above all, looking to the future of the artform.”

I think we should remind ourselves of just what the great music festival of the Proms represents. Its co-founder and first conductor, Sir Henry Wood, simply wanted to offer a wide-ranging programme of classical music at low prices to the masses (tickets were a shilling). It was only once the Last Night was televised for the first time in the 1950s that attendees started wearing patriotric clothing and waving Union Jacks.

Henry Wood himself emphasised the international flavour of classical music, and particularly its European-ness (he was particularly keen, for example, to show that Englishmen were capable of performing Wagner). When he put on a concert for Queen Victoria at Windsor Castle in November 1898, his programme consisted of Wagner and Tchaikovsky – which provoked the Queen to say “Tell me, Mr Wood, are you quite English?”

When, during the Great War, there was a campaign to ban all German music from concerts, Robert Newman, the director of the Proms, put out a statement that German music would be played as planned: “The greatest examples of Music and Art are world possessions and unassailable even by the prejudices and passions of the hour.”

The flamboyant Sir Malcolm Sargent (nicknamed ‘Flash Harry’), who did so much to popularise the Proms, was similarly broad-minded and non-political. He declined, for example, to become a member of the ‘League of Empire Loyalists’ and refused to sign a letter voicing opposition to a Communist-sympathising ‘Musicians Organisation for Peace’. He said he thought it was ‘a mistake to shout aggressively one’s patriotism.’

The Europeans certainly appreciated his internationalism. Among the foreign honours he received were the Order of the Star of the North (Sweden 1956), the Order of the White Rose (Finland 1965), and Chevalier of the Legion d’honneur (France 1967).

For me, the Last Night of the Proms has always seemed quintessentially British in the way in which it does not take itself too seriously, and it was Malcolm Sargent himself who encouraged all the klaxons and whistle-blowing during the most patriotic numbers. In the parlance, it’s long been a bit of a well-meaning piss take. So, while it’s certainly patriotic, it’s by no means nationalistic. There has indeed been a long tradition for different nationalities to bring their own flags.

As The Telegraph music critic Ivan Hewett wrote five years ago (when The Telegraph was still a half-decent, more balanced newspaper): ‘You can take along your Norwegian flag and feel very Norwegian – all while singing Rule, Britannia! Last year, I saw an Irish Republican flag. The concert has taken on a feeling of vicarious patriotism for every nation. And all of this gets wrapped in a communal bonhomie.’

A spokesman for the BBC said this week: ‘Flags are a traditional part of the Last Night of the Proms and audience members are not prevented from bringing them into the Hall. The Proms is not a political platform and, as always, we are sure there will be a wide range of flags on display.’

We must never forget that the arts and music have never been about boundaries, but are universal, for all mankind. As a writer, working in my own small way as ‘an artist’, I see it as a matter of concentric rings rather than pie-charts. I am not just a member of my community, my town, but an Englishman within a United Kingdom, with a single culture, that for forty years has belonged to a European Union that in turns sits within a western culture.

One could almost say that the true ‘anthem’ of the Proms is the Ode to Joy in Beethoven’s Choral Symphony, which proclaims quite unashamedly for all time the free, international spirit of music:

Thy magic power re-unites
All that custom has divided,
All men become brothers
Under the sway of thy gentle wings.

… You millions, I embrace you.
This kiss is for all the world!

Part of Beethoven’s original score for the Choral Symphony

The other night I was having a pint with an old friend of mine, Marc, a university lecturer and musician, and he claimed that when he was being creative he was doing it for himself. I argued that that was not good enough for me. My work has to go out into the world, to give something to people, on however small a scale. I have no interest in creating manuscripts that remain sitting unpublished on shelves.

‘The trouble with you, Gordon,’ Marc said, ‘is that you want the world.’

On that preposterous note I think I should close with an emoticon.

I’m delighted to see that even The Telegraph, in its review of the Last Night, is saying now more or less what I said above just before the concert (I almost wonder if the reviewer read my piece 🙂 ) : ‘The music laid its spell.‘

Sakari Oramo, who led the evening superbly, and personally requested that the EU flag be displayed on his podium, then gave a beautiful speech.

Music is the Cosmos. Music is a universal and true representation of the human spirit. Music unites us with the past and with different cultures. And it also carries our world, our times, and our creative ideas forward to future generations.

Listening to music, in a concentrated way, gives us the chance to lose ourselves and to find resolution, peace and unity in consonant harmonies. Whether it be your first time to experience live music, or perhaps you have spent all your life listening, there is something deeply magical about being part of a large group of people from different walks of life, listening in silence and with concentration to a great masterpiece of music.

Music enables us to be in dialogue with each other and our innermost selves, a dialogue which is more necessary in these days than ever before. [CHEERS]

This year we celebrate the 400th anniversary of the death of William Shakespeare. He wrote in his play, The Merchant of Venice, ‘If they but hear perchance a trumpet sound,/ Or any air of music touch their ears,/ You shall perceive them make a mutual stand,/ Their savage eyes turned to a modest gaze/ By the sweet power of music.’ [CHEERS]

Sir Henry, here, [MORE CHEERS] … was a tireless advocate of new music, both British and international. The Proms continues to be true to his example by hosting, in addition to British performers and composers, artists from all around the world, often performing the music of their own countries. Music both both old and new. Tonight we celebrate our shared global, cultural heritage, with music from the USA, Russia, France, Italy and South America, as well as the UK. And so, let us raise our voices of thanks to Sir Henry Wood, whose vision of access and inclusion for everyone continues to thrill and inspire us today …